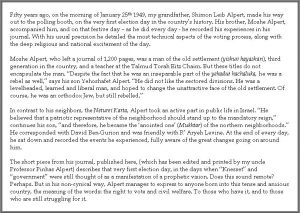 Election Day
24 Tevet 5709
January 25, 1949
The time is 5:35 a.m. I woke up. Me, my wife and my brother R’ Shimon Leib, and my brother in-law R’ Netanel Saldovin and my son, Dov. After drinking our morning coffee, we dressed in our Sabbath attire in honour of this great and sacred day, “ki zeh hayom asah Hashem Nagila veNismecha vo” (because this is the day G-d has made to be happy and rejoice). Because after thousands of years, or more of exile, that since the six days of creation, we have never been blessed with such a day, to be able to go and vote in a Jewish state, and “baruch she’hecheyanu ve’kiyimanu ve’higianu la zman hazeh.” My son, Dov, left this morning at 5:45 a.m., off on his own business – he is a strong supporter of the Herut party ((אצ”ל and has been busy all day and all night.
My wife, my brother in-law, my son and myself went to the polling booths in area 10 in the Hapoel Hamizrahi on Chavashim Street, with our Israeli identification cards in our hands. With great joy we took the quickest route from our home (because we lived in the Wittenberg houses in my aunt’s house (Davsha Goldschmidt) in the downstairs house that she owned. We lived there since the 11th of Tishrei 5707, because [the renovations] in my home which is in the Beit Yisrael area have not been completed yet and the entire time we had been living there. According to the voting laws, we had to vote in this area and not the Beit Yisrael area). The entire way I marched along as if it was Simchat Torah, as if I was carrying the Sefer Torah in my arms and doing hakafos, simply because my Israeli identification card was in my hands. There were no limits to the happiness and joy I felt that very morning.
At 5:50 we came to hapoal-hamizrahi building (according to the law the polling booths wereto open at 6:00 in the morning), and we were the first ones there. Only the janitor was there. The electricity was on. We asked the janitor, “where are the members of polling committee?” The answer: “They still have not come.” We waited until 5:54, when two men from the polling committee arrived, and at 6:02 the head of the committee, came, a prominent local lawyer. I protested that he had not come on time since according to the law he was supposed to begin at 6:00. He apologized to me. He looked around and concluded that since there was a quorum – the head of the committee, the lieutenant, and another committee member were present, as well as an observer from the Herut party – we could begin.
The janitor brought the polling booth, and the head of the committee called to me and said to me and my brother, “Ve-haderet pnei zaken,” and he asked us that the two of us would be witnesses to the procedure of the opening of the polling booth. He showed us the empty ballot box, and before us he signed it and tied a long rope around the box, tied it tightly and stamped it in wax, and recorded the procedure in a protocol. He wrote in the protocol that I had been there at 6:00 (I had really come at 5:55) and that he, the head of the committee, came at 6:02. And at 6:23 the voting began. The head of the committee told me that as I was the eldest of the people there, I would be the first to vote.
With a shiver of holiness, I passed my identification card to the head of the committee, who read out my name from the card. The lieutenant wrote my name on the paper, and gave me the number “1”. He gave me an envelope and I entered the next room where the voting slips of all of the lists were arranged. And with a trembling hand, and with a sense of holiness, I took a voting slip with the letter Bet, the list of the United Religious Parties (eichud hadati), and I put it in the envelope that the head of the committee had given me. I went back into the polling room and I showed everyone that I had only one envelope. And then I experienced the holiest moment in my life, a moment that my father and grandfather were not privileged to experience. Only I, in my lifetime, was privileged to be at such a holy and pure moment. Ashrei li ve-ashrei helki! I made the shehecheyanu blessing and I deposited the envelope in the ballot box.
I shook the hand of the head of the committee and the rest of the committee members and I left the room. I waited for my wife in the hallway for she was the second one to vote, and after her, my brother who was third, and after him my brother-in-law, Netanel Saldovin who was fourth. At 6:28 I returned home and went to pray. Yom Chag Gadol.
This article appeared in Kol Ha’ir before the last Knesset elections.