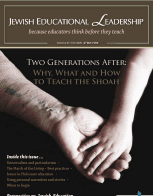 This article was published in Jewish Educational Leadership issue:

Nance Adler lives in Seattle where she teaches in a variety of settings. She has a Master’s in Jewish Studies from JTS and was the recipient of the Maria Erlitz Prize for Teaching Excellence for 2009. In this article, she shares the principles she used to create a provocative and probing Shoah syllabus for her fifth grade class.

The controversial nature of teaching the Shoah (Holocaust) in the fifth grade was not well known to me before I was asked in 2006 to teach the course. But as I began to do some research I found that there were strong opinions on this topic. “Pedagogically unsound” and “developmentally inappropriate” were words that I repeatedly heard as part of these discussions. Considering all the gore and violence our students are exposed to on a daily basis on TV, in video games, movies and books, I found it hard to believe that there was not a way to teach the Shoah in the fifth grade that would be both pedagogically sound and developmentally appropriate. Armed with the concerns of my colleagues but equally with my conviction, I began to put together a curriculum for my classroom that would teach my students about this important time in Jewish History and help to create in them the sense of urgency necessary to insure that such crimes would never be repeated.

For me, teaching about the Shoah isn’t just about teaching the horrific history of what happened in Germany and Europe during the Third Reich. It is about creating young people who understand that it can be a few short steps from name calling to genocide, that prejudice isn’t harmless and that propaganda and a good orator can lead people to do horrible things. With this in mind, I knew that I needed to teach about the history of Germany from 1933 -1939 as this is the time period during which history could have changed but didn’t. This decision was affirmed when I took the “Holocaust and Human Behavior” course through Facing History and Ourselves (FHAO) the summer of 2008. To hear that I had focused on the right historical period confirmed what I already knew from the work of my students – understanding what happened to create a world where the Shoah could occur was vital if we are to keep it from occurring again. I also learned from FHAO the idea of creating “Upstanders”. An Upstander takes action when a wrong is being done rather than being a bystander and allowing it to happen unchallenged. This is now a byword in my class and a goal of my Shoah curriculum – to create Upstanders who, based on their knowledge of this history, will work to assure that it is not repeated.

We begin the year reading Vive La Paris by Esme Raji Codell as a read aloud. This is the story of Paris, a young African American girl in Chicago, and her Jewish piano teacher, Mrs. Rosen. This wonderful book not only introduces the Shoah through the eyes of Paris but also shows the prejudices she faces. We discuss the similar experiences of Blacks and Jews, the evils of prejudice and how life experiences impact faith. We then read stories of child survivors from a book called Survivors: Stories of Children Who Survived the Holocaust. The students then chose a book for an individual book project. This brings me to my main guideline for Shoah stories read in my class – the main character has to survive. This is based on the concern that forming an attachment to a character and then having them be killed is too hard emotionally for fifth Graders. This means that Anne Frank’s diary would not be allowed to be read for a book report in my class even though many of my students have already read it.

My students keep a Shoah Journal where they write their thoughts and/or questions or to respond to my pre-reading prompts for these stories. These journals are our private conversation and are not shared without the student’s permission. It is here where real growth and understanding develops on these hard topics and it is here that I see beautiful evidence of the deep thinking of my students. They write questions, poetry, gut reactions or draw illustrations for the story that they have just heard. Some students write pages and others are so dumbstruck by the story that they can’t write much of anything. I have had conversations about faith, human nature and what it took for these people to survive. Responding to each journal is a time consuming but extremely worthwhile and important part in achieving my overall goal of creating Upstanders.

The next step is a lesson on the power of hate which I do so that the students are able to process the events they are about to study in an informed manner. I use the Pyramid of Hate to teach about the various levels of hate and show just how few steps there are between prejudice and genocide. Armed with this frame of reference, the students are then able to study the events of 1933 – 1939 and see the unfolding climb up the Pyramid of Hate towards genocide. At the FHAO seminar I learned that a frog will jump out of a pot of boiling water but if placed in a pot of cold water that is slowly heated it will allow itself to be boiled to death. This is an apt illustration of what happened to both Jews and Germans during these years. Having this framework allows the students to see the slow boil and perhaps understand why the Jews didn’t leave earlier. It doesn’t excuse but helps to explain why Germans went along with a leader who, step by step, dehumanized the Jews and created a society where the Shoah occurred largely unquestioned. Having this framework helps make the study of these events relevant and interesting. Another way that I make this history accessible and interesting to my students is by using the writings of young people who lived through this period. We read diary entries and story excerpts as we study each time period thus allowing the students to form their own impression of both the events and what it was like to experience them. All of this leads to our culminating activity – the Shoah Character Narrative.

The Shoah Character Narrative is based on an assignment that was created by the Head of Judaics at my school. The character each child creates only experiences the events of 1933-1939 and not the camps and mass killings of the 1940’s. In keeping with my requirement for stories which we read in class, the character must survive and many of the narratives are written as memoirs. Characters are created using a “reverse identity circle.” We start with a blank circle and create the pieces of each character’s identity. Students give their character a name, parents, birthplace and date, siblings, a school, level of Jewish observance, hobbies and economic class. They have fairly free reign in this process other than that their character must be Jewish, live in Germany and be at least eight in 1933. They then write a “back story” to introduce their character and show what their life was like prior to the election of Hitler in January 1933. Their character then lives through 1933-39 and experiences formative events such as the election of Hitler, early laws affecting Jews, The Nuremburg Laws, Kristallnacht and wearing the Yellow Star. While the minimum requirement is fourteen paragraphs, most students write much more. They create a whole world and life for their character which is then impacted by the realities of being a Jew in Germany during this time period. The resulting stories show a command of the history, an understanding of what it was like to live through these events and a sense of not wanting this for anyone else. This assignment creates a memory for the student writer – a memory of living in Germany in the 1930’s. It is this memory that I have now come to believe will most help these young people grow into Upstanders working to make our world a more peaceful and equitable place.

It is my belief that much like Shabbat, about which it has been said “more than Jews have kept Shabbat, Shabbat has kept the Jews”, the Shoah requires not just remembering but guarding. Guarding as an active remembering, guarding as forming our own memories of events we did not live through so that when those who did live through them are gone we do not forget what they suffered. On Passover each year Jews say “My father was a wandering Aramean” and “I went out of Egypt.” Jews today no more did those things than my fifth graders lived through the Shoah, but by guarding the memory in an active and personal way we have made Passover the most universally observed Jewish Holiday. Using this same technique, of creating personal memories of historical events, we can make the lessons of the Shoah part of the mindset of every young Jew. Guarding these memories by planting them in our own psyches will keep the lessons of these horrific times alive and relevant for future generations.

Teaching the lessons about what went wrong in a given situation and discussing how things might have been different is an activity without age boundaries. It is done in Kindergarten when speaking about problems during recess and it can be done in relation to the Shoah in fifth grade in a way that is both age appropriate and pedagogically sound. My students love learning about the Shoah; for many it is their favorite subject. Even those who find some of the stories hard to hear know that what they are learning is important and meaningful and therefore are eager to learn more. Guarding our younger students from the horrors of the Shoah – the pictures of dead bodies and stories of the camps – does not preclude us from teaching them the lessons of this difficult period of history. Done with care and planning, teaching the Shoah in the fifth grade can sow the seeds of concern for our People and our world and create a generation of Upstanders. It is with this ultimate goal in mind that I will continue to teach this history to my students and hope that others will follow suit.