What does meaning-making look like in Talmud education? Is it possible to make the text meaningful to students without sacrificing rigor and skills-based learning? How might progressive educational models enhance student appreciation of Talmud study without taking away from traditional models of study?

These were all questions on my mind as I struggled with engaging my tenth-grade students in studying Makkot, a complicated tractate focusing on the laws of perjuring witnesses. The challenge of engaging students in Talmud education is not particularly new, as many students struggle to find relevance in the impractical nature of many of its texts.

Many of the classic sugyot (Talmudic sections) studied in high school deal with cases which are never encountered by students in their regular lives. Students don’t often come across an abundance of oxen falling into pits, people getting betrothed through agents, or large groups of witnesses arriving successively to perjure one another. An argument for relevance can sometimes be made for the more exciting cases in Sanhedrin or Bava Kamma, such as intruders breaking into homes, or questions of responsibility in property damage, especially with a lucky find of a modern news article of a similar case. However, while this may engage the students interested in future legal careers, these discussions still fall short of establishing personal meaning.

Switching to the more relevant tractates, such as those concerning Jewish holidays, is often not an option. The more practical sugyot lack the rigor and challenge needed for older students, especially in classes focused on building knowledge and skills. It also falls into the trap of conflating relevance and meaning. Although the laws of building a sukkah or the times of prayer are relevant to the lives of students, this does not necessarily create a sense of meaning and connection with the text.

Finally, Talmud teachers must also contend with the challenge of applying meaning-making to a text that is meant to be studied lishma (for its own sake)—possibly far removed from real-world problems and unconcerned with practicality. In fact, this lack of applicability highlights that the primary motivation for studying Talmud is religious devotion.

While I was ready to adapt my Talmud classes to facilitate more meaning-making, I needed to grapple with a number of concerns.

I did not want to sacrifice any of the rigor or skill-building aspects of the course, which would negatively impact the ability of students to grow into independent learners.

Implementing progressive models such as Project Based Learning takes a significant amount of class time. I did not want to fall behind other classes or for my students to view the class as less serious.

I did not want to sacrifice the affective goal of Torah lishma. Similarly, I wanted the values and connections that students would draw from the text to feel authentic and not an artificial stretch from what the rabbis originally intended within the “four cubits of the Bet Midrash.”

I decided to apply a modified version of Project Based Learning to teaching Makkot, specifically, having my students apply their learning of arei miklat (cities of refuge) to the challenge of prison reform in the United States.

I began the unit with a few weeks of learning sections of Makkot in the traditional, rigorous way, focusing on Talmudic skills, vocabulary, and content. The unit was framed by sharing with students that they would soon be applying their knowledge to solve issues within the American prison system. Periodically, throughout our learning, students were asked to draw out values from the text about the role of arei miklat, setting up many of the questions they would eventually investigate in the PBL part of the assignment:

What are the goals of arei miklat, and how might these goals differ from those of prisons?

What do these Talmudic texts say about the values of rehabilitation versus punishment, justice versus mercy?

What values do you see in these texts that speak to you personally?

Students were also tested on content to ensure that skills benchmarks were being met. The hybrid of traditional skills-based study and the PBL model allowed for the best of both worlds: independent Gemara learners and engaged students who are able to apply the values found in the text to new, relevant contexts.

Students then moved into the PBL part of the assignment. Here, I incorporated different elements of Project Based Learning into the assignment, as defined by the Buck Institute for Education.

Driving question: Students were presented with the driving question of: “How might our knowledge of arei miklat help us solve problems with the American prison system?” This led to an animated class discussion where students came up with their questions on this topic, connecting what they were learning in Makkot to real-world issues. Students developed their own questions, including: “Should the United States have different categories of accidents and prisons similar to those in Makkot?” and “How might the concept of hiyuta (the requirement to maintain a certain quality of life in the city of refuge) work with the concept of solitary confinement?”

Sustained inquiry/authenticity: Students watched excerpts from a documentary about issues in the prison system and heard a guest lecture from a chaplain about his experiences volunteering in prisons. The ensuing class discussions led to many more questions by students and increased the level of buy-in to the project.

Student voice and choice/critique and revision: Students were given a timeline of how the project would work. Each group researched their questions until they decided on a topic—allowing for in-depth inquiry. I handed out resources including articles, websites, and podcasts to help them with research and different options to choose from (one group decided to research a topic they thought of on their own about the treatment of women in prisons). I also had periodic check-ins with each group to provide guidance on their projects and give feedback.

Public presentations: Each group was asked to present their project, and I invited a range of teachers to attend the presentations. I specifically chose teachers with a Judaic studies background who also taught American History or Government or who were lawyers so that they would qualify as quasi-experts on this topic. After each presentation, the other students in the class, and the guest teachers asked questions of the students presenting. Many students felt that the most enjoyable part of the project was when they were the experts in front of the room, answering questions on the topic they had chosen.

Student reflections: While I knew that student engagement was high during this part of the project, I wanted to make sure that I had met my goal of increasing meaning-making and student connections with the values of the Talmudic texts. In their reflections on their experiences many indicated that they felt invested in their topics and now wanted to find out more about issues in the prison system. I was happy to hear students express that they found the Gemara to be relevant.

When asked to identify the most important takeaway from the project, students shared:

“That the moral lessons that can be learned from Gemara can be applied to real-life situations/problems.”

“That Gemara relates to real life.”

“We should try to fix the prison system based on the arei miklat because that was a very organized and fair system.”

“Connecting what we are learning in class with issues of today.”

“[It] pushed me to further investigate and understand the problems within our prison system… I got to relate two separate topics and it forced me to understand things from a different perspective.”

Overall, I was satisfied with the outcome of this experiment. The prison reform project animated the classroom and had even the most skeptical of students sharing how meaningful they found the topic of arei miklat. Implementing a modified version of PBL helped students connect the text to their own lives in an authentic way, irrespective of how practical (or impractical) the cases were in the Gemara. Students engaged in meaning-making, researching questions about the American prison system through the lens of values drawn from the Gemara. It did not matter whether arei miklat would ever again be employed as part of a justice system, as students were able to draw out the values and ethics that spoke to them personally and which could then be applied to real-world problems. Additionally, incorporating select PBL units did not take away from the intensity of the class or the traditional skills being taught, and the added engagement and excitement of the students more than made up for the “missed” class time.

Moving forward, I wonder where else entry-points may exist within traditional sugyot to use an adaptation of PBL to allow for more student meaning-making. I would encourage educators to explore this approach in teaching Talmud, where meaning-making can exist independently from relevance, allowing the values found in the Talmudic texts to speak personally to our students. 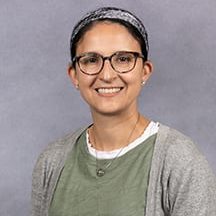 Sarah Gordon serves as the Director of Israel Guidance and Experiential Education at Ma’ayanot Yeshiva High School, where she also teaches Talmud and Contemporary Israel. She is currently pursuing her Ed.D in Jewish Education at Azrieli Graduate School as a Wexner Fellow and Davidson Scholar.

← Design Thinking and the Relevance Gap Curating the Past, Creating the Future →