As an educator, I have fairly lofty goals when it comes to the takeaways I want my learners to have from our time together. When I engage in the sacred work of Jewish education, I do so with the aspiration of inspiring my learners to be intentional in the ways they make decisions, the ways they walk through the world, and the ways they interact with others. I regularly say that my greatest disappointment when it comes to my work as an educator would be if my learners left our time together feeling fully satisfied, as though there was nothing else for them to learn. Instead, I want them to be intrigued and inspired to the point that they seek out a next step—more learning, more meaning-making, anything that will keep them searching for the next piece of wisdom and understanding.

In addition to my aspirational goals, I also embrace reality: I work with Jewish high schoolers. They are complex and inspiring future leaders, but they’re also as likely (or more) to spend their time fixating on college applications, climate change, the latest TikTok video dance, or the challenges of coming of age during a global pandemic that has turned the world on its head as they are to derive moments of introspection from the Jewish canon and commentaries. So, while my vision is of them as links in a golden chain, primed to inherit the collective wisdom of centuries of the Jewish people, I decided to ask them about their takeaways directly. I posed the following question to current high school students from the Northeast and Mid-Atlantic who completed congregational b’nai mitzvah programs, and who are alumni of supplementary or day schools: What, if any, value-add do you see Judaism as bringing to your life? These teens, who are largely not currently involved in organized Jewish life, but who do have foundational Jewish education and enculturation experiences, were reflective, thoughtful, and introspective. While each answer was nuanced and complex in its own way, I believe the key themes can be their own contributions, adding to our understanding of Jewish education and the needs of bringing meaning to the next generation. Here is what emerged from their responses.

Judaism reminds me that my people have fought for a chance, for equality, and to be accepted. It reminds me that I can’t look at other people and say their problems aren’t mine.

Lia (all names changed), a high school freshman from Maryland, reflected on Jewish meaning as a call to action that informs how she interacts with other individuals and groups. With a Jewish education that places Jewish history and values into a context that is responsive to activism and justice movements, Jewish teens can internalize their experiences as connected to the world around them. As educators, our mission through this lens is to offer nuanced explorations of Jewish experiences of power, shared values across cultures, and a global view that gives voice to the balance between universalism and particularism. Collectively, Jewish teens today see themselves as intertwined with their neighbors, regardless of religion. By giving a Jewish lens to their actions and activism, we are able to build a culture of relevance and pride when it comes to what Judaism means in their lives.

Being Jewish makes me a minority, and I think being part of that helps me relate to others. Because even though I’m White, I feel like being part of this group helps me stick up for others, and to be grateful for the things I have.

This reflection from Sophie, a junior from Virginia, goes hand in hand with Lia’s words above. Sophie emphasizes the value-add that having a strong identity as part of a minority group brings in terms of self-efficacy. Today’s teens are growing up in a world that is increasingly aware of intersectionality and the overlapping facets of identity that each of us contains. They are learning that to be Jewish is not to look a certain way, and cannot be taken as an assumption of race, ethnicity, class, gender identity, or any other category. At the same time, for Jewish teens who are in touch with their identities as minorities, this is the lens through which they view the world. They are able to understand what it is to be part of a group that has been viewed as “other” and to lean into making choices about how they’ll relate to that identity throughout their lives. With educators as guides to help them understand the burden and responsibility of being part of a minority population and instilling a strong sense of pride in what it is to be Jewish, they will be empowered to fully embrace Judaism as key to their complex identities.

For me being Jewish is about the connection I have with people. Being able to talk to someone and knowing that we share the same culture, and foods, and Jewish moms, and being aware of antisemitism, and knowing that we’re such a small population.

When Stephanie, a senior from New Jersey, shared this vision of what Judaism brings to her life, it warmed my heart. When teens feel an affinity for the Jewish community that spurs authentic connections and gives them a home in the world, it feels like a success of Jewish education. Ultimately, for our learners to see Judaism and the Jewish community as theirs, as spaces that fulfill and enrich them, is a step towards their own meaning-making that can take the seeds we give them and grow them into diverse, cultivated gardens of value and lessons learned.

Judaism as a Lens on the World

I look at the world with more compassion and empathy.

Scott, a junior from New York, shared these words as he reflected on how his Jewish identity has shaped him. Like many teens, he wasn’t necessarily able to pinpoint all of the specifically Jewish moments in his life, or Jewish-inspired actions that he takes. But the beauty of Judaism not existing in only certain circumstances or spaces means that Judaism is able to inform the core of who learners are, how they present themselves in the world, and the choices they make—by taking seemingly straightforward, nondescript interactions and activities and posing questions of how these things might be different if they were approached through a lens of Jewish values, or how they might approach elements of their lives differently if they thought of them as moments of meaning. When every experience becomes an opportunity for a new perspective, Judaism becomes part of the complex individual and their path in the world.

My Jewish tutor from my bat mitzvah is someone who I have an awesome relationship with. It’s just improved my relationships with adults and how I talk to them. I think it’s one of the few adult relationships I have that is really strong.

While most of the teens spoke in broad-strokes terms about Judaism as a concept, for Lauren, a freshman from Maryland, Judaism was embodied in the personal relationship she found with someone who invested in her as a mentor and role model. We know that having a non-parent adult role model is critical for the healthy development of adolescents, and for teens to find those trusted adults within the Jewish community can be transformative. While all Jewish educators have the potential to be role models, investing in healthy personal relationships with learners at critical stages of their development provides benefits for both parties. Not only do the teens have someone who cares about them, whose wisdom they can benefit from, and whose experiences they can learn from, but they are able to build an understanding of what their Jewish futures can look like. Judaism at its core is an intergenerational practice, and by taking the initiative to share our own Jewish stories, we are able to pass it on to those who look up to us the most.

As educators, each choice we make creates an encounter for our learners. As we build the synergy between them and the canon of Judaism, we are the facilitators of the next steps of their lifelong journeys as the inheritors of the collective wisdom of the Jewish people. They will take what we provide, connect it with their lived experiences, and ultimately each will choose for themselves how to integrate the lessons of Judaism into their lives. By giving them platforms that enable them to see the value-add of Judaism and how it can apply to their own multifaceted lives, we allow Jewish education to go beyond the classroom, out of the text, and into the complex, colorful worlds that our learners inhabit. Dr. Samantha Vinokor-Meinrath is the Associate Director of Adolescent Initiatives at the Jewish Education Center of Cleveland. A lifelong Jewish educator and learner, Samantha recently completed her doctorate at Gratz College, where her dissertation focused on unengaged religious school alumni. Samantha lives in Pepper Pike, Ohio, with her husband and two rescue dogs. 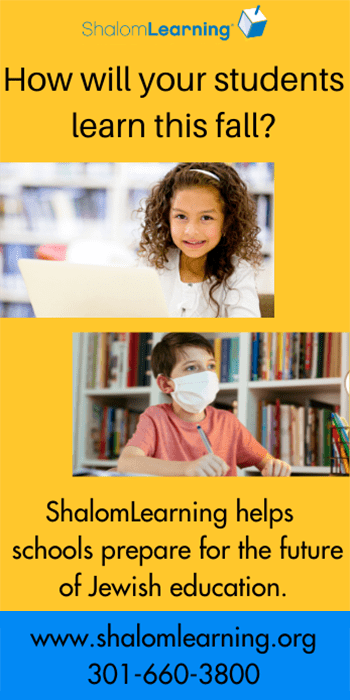