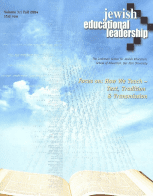 This article was published in Jewish Educational Leadership issue:

The Pesah Seder is often cited as the model of the quintessential educational experience as envisioned by our sages. It is interactive and stimulates all of our senses to create a profound impact on our core identities. A close look, however, reveals that the way it is currently practiced, and more significantly, the way we prepare our students for it, may actually rob it of a substantive portion of its designed effect.

Mishnayot in the tenth chapter of Pesahim record the order of the seder: A cup of wine is brought, and the Kiddush recited. Various dips are brought to the table (let us remember that, in the Talmudic era, meals consisted primarily of bread with a variety of dips), followed by matzah and a vegetable; according to one opinion, in the Temple precincts they would actually bring the Paschal sacrifice. When the second cup of wine is poured, it is expected that the child, curious about what has transpired, will begin questioning. If the child is not aware enough to notice the differences, his father is to prod him with a series of observations – “Look at how different tonight is from all other nights!” The continuation of the Mishnaic description states that the father should teach his child according to the child’s ability to understand, and suggests that the teaching begin with an exploration of how bad things were before they got better. Finally, the Mishnah adds that part of the seder should include an expounding of the Torah portion beginning with the description of the wandering Aramean.

Let us consider what preparation this child had for this event. Was the child trained in advance to memorize a series of questions he would perform for the assembled? Apparently not, as the Mishnah seems to suggest that the questions are spontaneous. In fact, there is no fixed text for the questions the child asks, only for the father whose child has failed to notice the changes at the table.

Let us further explore the nature of the interaction at the table. One would be hard-pressed to find in the Mishnaic account a description of a recitation other than the Hallel. Indeed, just as there was no fixed text for the questions asked, so too the Mishnah does not seem to suggest that there is any fixed text for the seder. The process described is not one of recitation but one of a dynamic interaction – and by necessity, one that will vary from year to year based on the ages of the participants, with the only specific requirements being the inclusion of a discussion of Pesah, matzah and marror.

The plan of the educational experience known as the seder was essentially to gather the family for a festive holiday meal. The meal would begin as all holiday meals would, with the recitation of Kiddush, yet before the meal would actually get underway, a second cup of wine would be poured, alerting the child. It is precisely at that point that the child is expected to have noticed some of the bizarre goings on, and if not, then the child’s father is instructed to point them out.

According to the Mishnah, the parent was neither expected nor encouraged to teach the child what would be happening at the holiday meal. Were the child prepared in advance, the sense of newness and strangeness, essential in the design of the seder to spark the child’s curiosity, would be completely lost. It is precisely the unfamiliarity of the evening’s events that generate its greatest power; advanced preparation for the event may create a different sense of excitement, but would have denuded the seder of its essential educational element.

Further, as there was no fixed text known as a Haggadah, it was obviously not studied in advance. The dynamic of the seder was about exploration, and the educational component for the children was certainly not about texts, but about the unfamiliar. Even the Mishnaic reference to studying the portion on the wandering Aramean does not suggest a recitation of the Mekhilta, rather, it offers a text as a framework within which to tell the story. The current popular practice of studying the Haggadah in advance, so that the children (or their parents) can recite insights about the text of the Haggadah, is unknown to the authors of the Mishnah, and may even contravene the essence of the design of the seder. The oral and interactive/dynamic transmission during the seder was a seminal part of its conception.

Creating a contemporary educational program for the seder needs to focus on the parents as much as on the children, restoring the parent’s role as a key transmitter of an oral tradition, and should account for the essentially non-text component of the evening. In the younger grades, model seders should be held for parents, and not their children. Educational packets should present parents with the tools for leading a seder which positions the children at the center of an inquisitive process directed by the parents; as their children grow, parents need to be taught how to encourage their children to ask more substantive questions. Classroom activities can include the opening up of questions, which the students can then bring to their respective seders while their parents can be clued in to the types of questions their children will be asking and workshops offered them to help them formulate appropriate responses or direct further discussion. In this manner, the dynamic created at the seder table will be a model of oral transmission, and a true reflection of the design established by the Mishnaic sages.

[1]Daniel Goldschmidt, in his Haggadah Shel Pesah (Hebrew) (Jerusalem: Mossad Bialik, 1960) p. 30 suggests that the choice of this passage was its brevity and familiarity, as every farmer recited it upon bringing of the first fruits to the Temple, which allowed it to serve as a springboard for discussion.